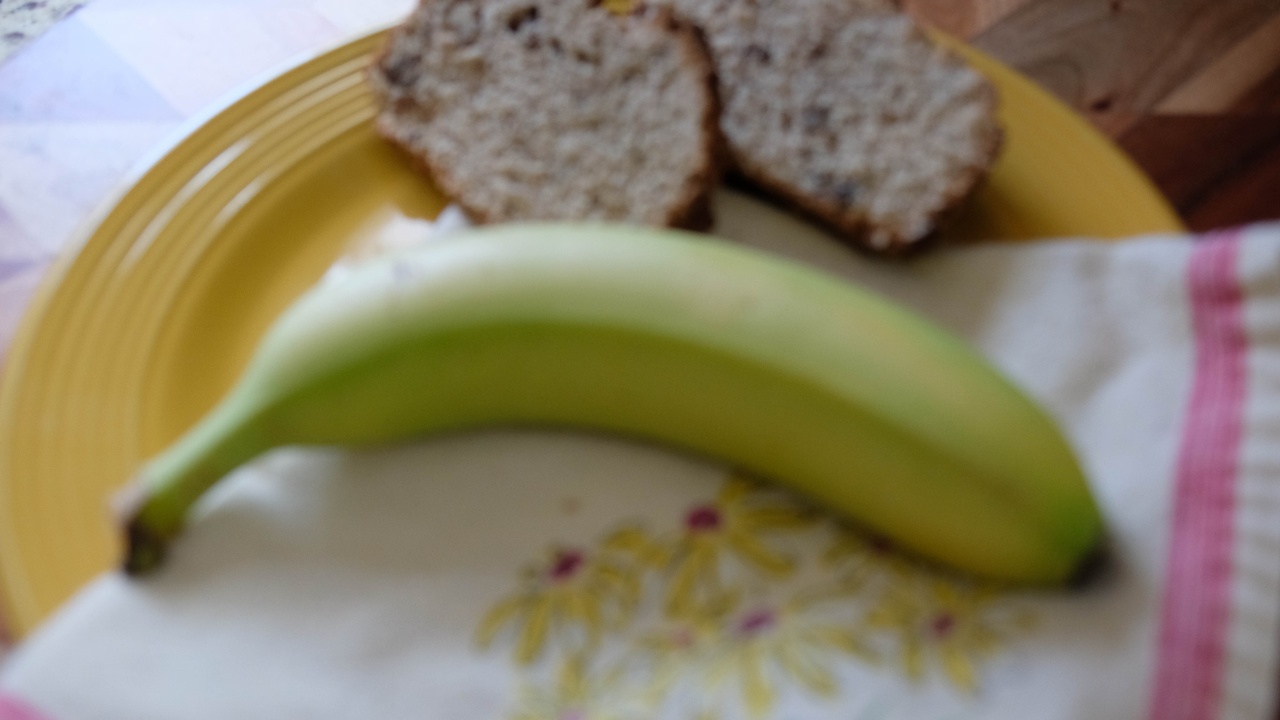 Bananas shouldn’t be sold in bunches.

Only one at a time…just like apples, pears, and coconuts. In groups their power increases exponentially. And, sometimes like people, not always for the better.

A single one of these boat-shaped yellow fruits offers small amounts of copper, magnesium, and potassium while possessing high levels of fiber, vitamin B6, and guilt. You just won’t find this last compound included on the nutritional analysis label. It should be.

It’s not because they’re difficult to prepare for eating. (Bananas, not people.) Whether their coverings are opened by sawing off a corner, pulling the stem backwards until the peel “pops”, or slicing the spine surgical style, there’s no incredible amount of time, ability, or energy necessary to get to the soft fruit. Throughout many parts of the world, the antioxidant-rich peel isn’t discarded but consumed, whether raw or cooked. They have the benefit of being a quick, natural, ready-to-eat snack. Still, their simplicity camouflages their disabling capacity.

Along with being easy-to-eat and nutritious, bananas are budget-friendly. On average, for the past seven years in the United States two quarters and a dime would buy you a pound of bananas. Drop those coins in a vending machine slot, and all you’ll get is an austere “Insufficient funds” message. This purchase, however, is only economical if it’s consumed. And therein lies the problem.

In my home bananas seem to be more desirable in theory than reality. I’m suspicious their color has something to do with it. Yellow is a happy color! It’s joyous. Cheerful. And when there’s a heaping mound of this sunshine hue greeting me at the entrance to the produce section, it seems rude to decline the delightful invitation. Into the cart plops a clump along with a whispered-to-myself promise, “This time I’ll get it right.”

The purchase is made with the best of intentions. I’ll leave these on the counter in a pretty wood bowl where I can pick one for a quick snack instead of opening the drawer beneath and grabbing a handful of chips. I’ll add one to a morning yogurt smoothie for a nutritionally-dense breakfast. I’ll wait until they’re just a little over-ripe and bake delicious banana bread, adding walnuts, raisins, or – just for special occasions – mini chocolate chips. The possibilities are bountiful.

You can’t know for certain what’s going on under the skin until it starts showing through on the outside. And then you’ve got to be prepared to act – quickly. If not, this is where the slow slide into the garbage heap begins.

At first the bananas’ yellow darkens, like sunlight tones slinking away. Then dark spots appear, the first official “Act soon” notices. I make a mental note and move on. Other tasks are waiting. The bananas can wait, too. Yellow continues to be overrun by the invading brown team, and I move the wooden bowl to the island, telling myself this geographical change will prompt me to act. The move opens the door for guilt. “When I fix dinner, I’ll just go ahead and whip up a batch of banana bread.” But dinner plans change, and the spotted produce is put on hold. “It’s okay. There’ll be time tomorrow morning.”

The next day’s plans go awry with a poor night’s sleep, an early morning phone call, a sick child or spouse, a text from a friend, or an email box overflowing with compelling messages. The bananas blacken. The guilt increases. The bowl is covered with a towel – “to keep any gnats away.” Life presses on. As does the decay. And the guilt.

Until. I finally stop, determined to stop hiding from the decaying fruit. And it is the decision I make now which will make all the difference. I strip away the storm-clouds-colored peels and squish the bananas into a bag…or into a bowl. If it’s a bowl, I’ll add flour, leavening, sweetener, liquid, and eggs. Maybe even walnuts, raisins, or mini chocolate chips. Redemption is always worth celebrating, right? The oven will be preheated, a bread pan prepared, and a batter poured in. In under an hour, an entire transformation will occur. For the bananas and the guilt.

But if I choose a bag instead of a bowl, I only delay the inevitable. As I press out as much air as possible, seal the plastic bag, and set it inside the freezer, I tell myself, “I’ll thaw these and make bread later. When I have more time.” I deceive myself.

Later will come. But not bread. Not rescue. Only a final acknowledgement I waited too long as the garbage becomes the resting place for another cluster of possibilities as I drop the aged, frozen, shriveled, blackened remains into its jaws. Too bad the guilt doesn’t shed as easily.