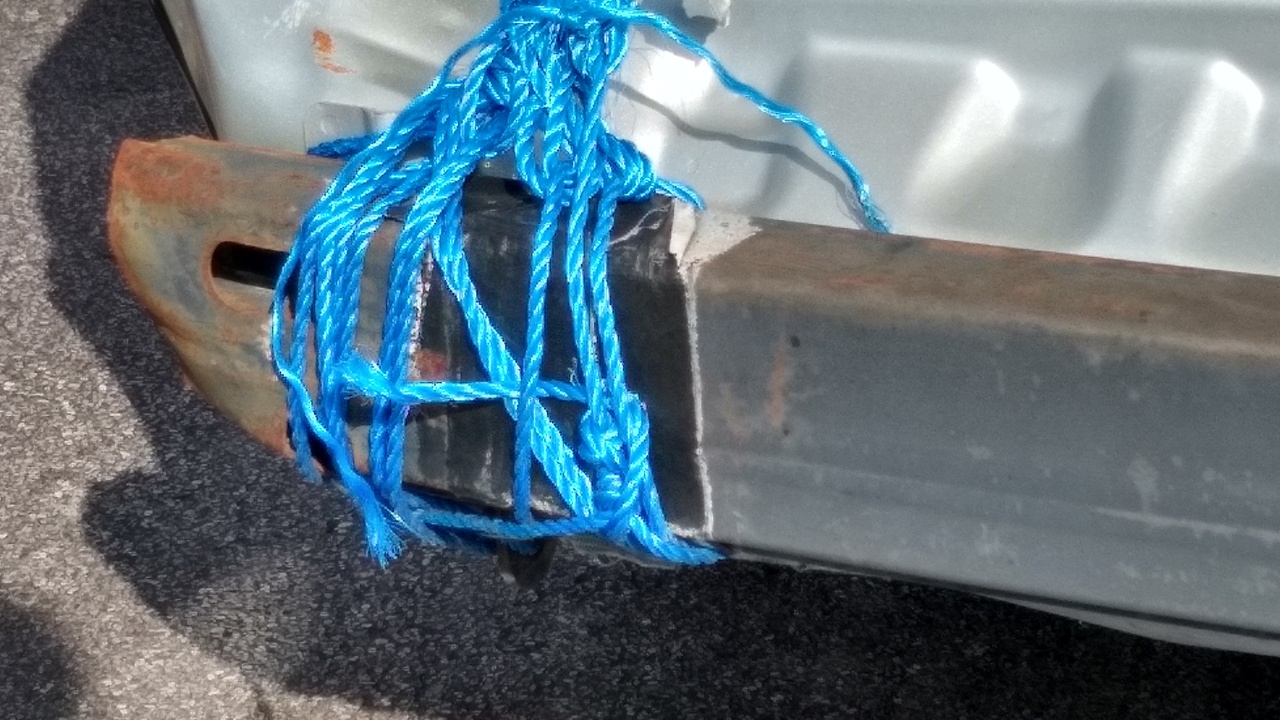 I don’t know what object the bumper of this car encountered to require it being lashed into place.

The other end of the vehicle’s backside was in even worse condition. Dented didn’t come close to the description. Even crushed lacked completeness. A smashed back light bulged from its twisted metal socket. Where once a smooth, rounded corner joined the auto’s side to its back, now protruded a multitude of sharp and distorted scalpels. A curious mix of wire, tape, and rope – simultaneously comic and tragic in its effect – held the entire back end together. Yet there it sat. Not in an auto salvage yard but a grocery store parking lot. Apparently, it still got its owners where they needed to go.

I quickly pushed the shutter button, feeling a little weird standing behind a stranger’s vehicle snapping pictures on my phone. I was quick. I didn’t want to end up looking like the object in front of me.

We hear phrases with the consistency of the sun’s rising and setting. “Life is hard.” “Life doesn’t play fair.” “Life is full of problems.” “Doing great? Just wait. It’s only a matter of time before something changes that.”

We know these statements are true. Yet why do we continue to revolt? To be surprised, disappointed, upset, frustrated, disillusioned, annoyed, ticked off, discouraged, depressed, outraged, and anxious?

Why do we work so darn hard trying to “set things right?”

Coca-Cola® popularized the song, “I’d Like To Teach The World To Sing,” in its 1970’s commercial equating their fizzy molasses-colored beverage with world peace.

Why hasn’t millennia of history taught us the world’s dominant two-legged species isn’t going to join hands and “sing in perfect harmony?”

Why do we keep fiddling with the combination lock thinking if we just keep working long enough, we’ll happen upon the right combination and the World Peace trunk will spring open?

Or forget that lofty goal. We’ll settle for dissolving the rust from the Personal Peace crate’s hinges and, with a little oil and tenderness, lift its lid to reveal a lifetime supply of precious gems: delightful marriages, enjoyable children, a settled self, amiable coworkers, engaging friends, satisfying purpose, and more.

Why does optimism continue to vex us?

World peace didn’t become our mantra after being popularized as the correct answer to somber judges’ questions of beauty pageant contestants’ priorities. It’s been our yearning since losing our place.

We’ve been broken, banged up, and lashing ourselves together ever since.

Sometimes we’d rather just be hauled off to the salvage yard.

“It’s too hard. I can’t go on. Not like this.” Yet breath ignores our pleading and continues pumping its fuel through our lungs.

“I don’t know if I can make it.” Yet we clamber into the worn driver’s seat, hope prodding us to repeat familiar steps, whispering promises of moving ahead.

“I don’t have what it takes to fix this.” We scour our surroundings, gathering whatever’s at hand, lashing the mangled pieces into place, until…

“Until” reveals the divine embedded into humanity.

It’s not the sleek, sparkling, not-a-crumb in it, not a speck-on-it, whizzing-down-the-highway life which reveals our supreme significance. It’s the knowledge – irritating and overwhelming as it sometimes is – bolted into our souls that we live in “Until.”

We may have left Eden, but it hasn’t left us.

We no longer live there. We reside in “Until.”

We chafe at this. Lament it. Strive against it. Attempt to ignore it. Hate it. Beat against it. Minimize it. Until…

We accept it. Not in a passive and pessimistic manner. Not as an excuse to live recklessly and selfishly. But with resolve and resourcefulness. We may live “lashed together,” but by God, we’ll live!

We won’t be undone by “Until!”

Every time we climb, fall, or drag ourselves into the driver’s seat, turn the key, exhale hope we’ll make it just one more trip, and push our foot on the pedal, a message reverberates throughout the universe. “Until” is temporary! “Until” has an expiration date! “Until” is the trip, not the destination!

There is a day of peace and harmony coming. Not because every hand clutches a soda can but because His hand will grasp ours.

No matter what obstacle your heart has collided with; no matter how much damage was done; no matter how woefully lashed together you feel, you’re not home yet. The days of “Until” are numbered.